OBJECT OF THE MONTH 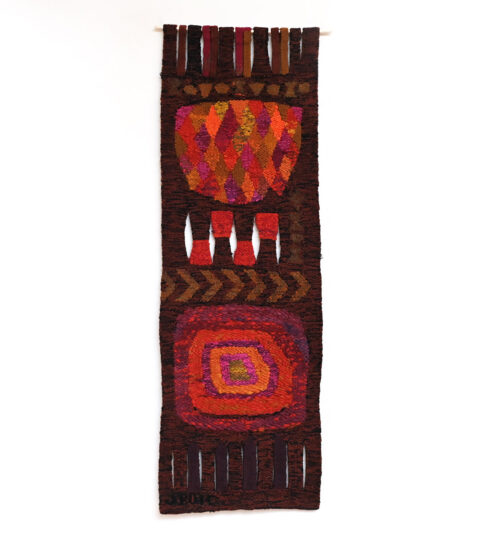 As a homage for the recently deceased multimedia artist Jagoda Buić (14 March 1930, Split – 17 October 2022, Venice), we are exhibiting the Fiesta as the Object of the Month.

The work of art was created at the end of the 60s of the 20th century, in the decade when tapestry became the primary creative area and technique of Jagoda Buić. It is characterized by an abstract geometric composition, accentuated by the texture of woven wool thread and delicately coordinated bright colors, as well as ‘incised’ parts that, as a matching element, introduce the surface of the wall on which it is displayed as a whole. The tapestry is some kind of mediator between the first stage of the author’s artwork and her mature work, which has brought her the halo of a world-renowned artist.

The Fiesta received an award from the 1969 Zagreb Salon, and was also presented in Buenos Aires, as well as at the Lausanne International Tapestry Biennale – at that time the most important manifestation of contemporary tapestry art.

Postscript It was in our Museum that Jagoda Buić exhibited her tapestries for the first time, to be more precise, in 1963 at the Contemporary Yugoslav Tapestry exhibition, which showed the scope of this then favorite artistic discipline practiced in Yugoslavia only during the past ten years. One decade later, Jagoda Bujuć was included in the circle of the most important tapestry artists in the world who had changed the perception of this medium.